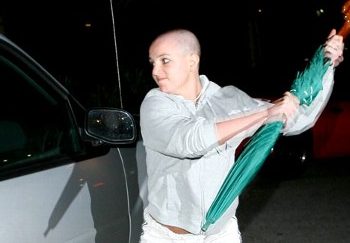 First of all… let me apologise… at the time, when all these pictures were circulating of your new shaved head, with you wielding an umbrella like a machete, I totally judged you.

I thought, shit. Is this what I’ve got look forward to in years to come?

Well, It appears so.

Life can be pretty overwhelming…. and whilst I can’t muster up the courage to shave my head, I can totally relate to losing your shit for all to see, and if I had an umbrella to hand yesterday, I’d have smashed the hell out of my car too.

You see…I talked myself into taking the toddler group plunge. Something that usually makes me want to spoon my own eyeballs out. I was prepared, twins bums had been changed, they were fed, watered and I’d even washed my hair instead of eating my cold toast. Organised me had even called and paid beforehand, to save me the hell of queuing with two whingey kids. I had plenty of time to spare, and I even put lippy on, whilst still sat in the driveway. Then, like the end scene of a 4 part, BBC drama, disappointment struck me like a quick back hander across the face, when my car battery had failed me.

The final straw of a weeks worth of toddler tantrums, punches, kicks, flicked Weetabix on my walls, back poos, last minute shits as I’m leaving the house, bruised legs from the buggy, lasagne in the carpet and taming a wild stroller that was possessed by storm fucking Doris. Not to mention lack of sleep through an itchy nip having had a mole removed this week.

There I was. Two screaming kids hauled back into the house. A call to poor hubby who took the hits, even though this wasn’t in any way his fault, a group message apologising to the girls I was meeting and the volcano of motherhood meltdown erupted.

The long and short of it being that after a failed attempt at jump starting, my car ending up stuck width ways across my street, neighbours out in force pushing it back up the drive, their wife trying to calm the kids who were screaming, me in a flood of tears spilling out all of my weekly woes and Keiths bestie coming to save the day (and wondered what the hell he’d walked into)….

I think at one point, I even said the words “it’s the camel that broke the straws back”….. so even my speech was affected by this meltdown. Worrying times.

After point blank refusing to even entertain the idea of going to the toddler group with my winge bag eyeballs, I took one look at my little love bugs and knew I had to suck it up. I went, I survived, and the boys had a great time.

When I came home, they were asleep in the car, the transition from car to house was going great, when my phone rang, waking them both prematurely, resulting in a few more tears.

Boy oh boy was I glad to be home.

After a week of a little poo nugget building into a fully fledged shit heap, today has started off good. It ended with two little boys in bulging nappies that hadn’t been changed all afternoon, because in the chaos that unfolded, I just hadn’t had the time.

When Keith walked in from work I was armed and ready to fight my corner on the embarrassing scene that had unfolded…. But instead of judging or thinking I’d finally lost it, he just got it. He totally got me, just when I needed him to.

Then my phone bleeped. A message from the neighbour, who simply wrote –

“Always here if you need us, don’t get into meltdown mode, just give me a ring. Asking for help doesn’t mean you’re a failure or incompetent, sometimes life just gets overwhelming. Hope the car is better 🙂 ”

Moral of the story is, nobody was judging…… not the girls, not Keith, not his bestie, not the neighbour who witnessed my Britney moment.

We all need one from time to time…. i’m just really thankful that I wasn’t shaving my legs at the time….