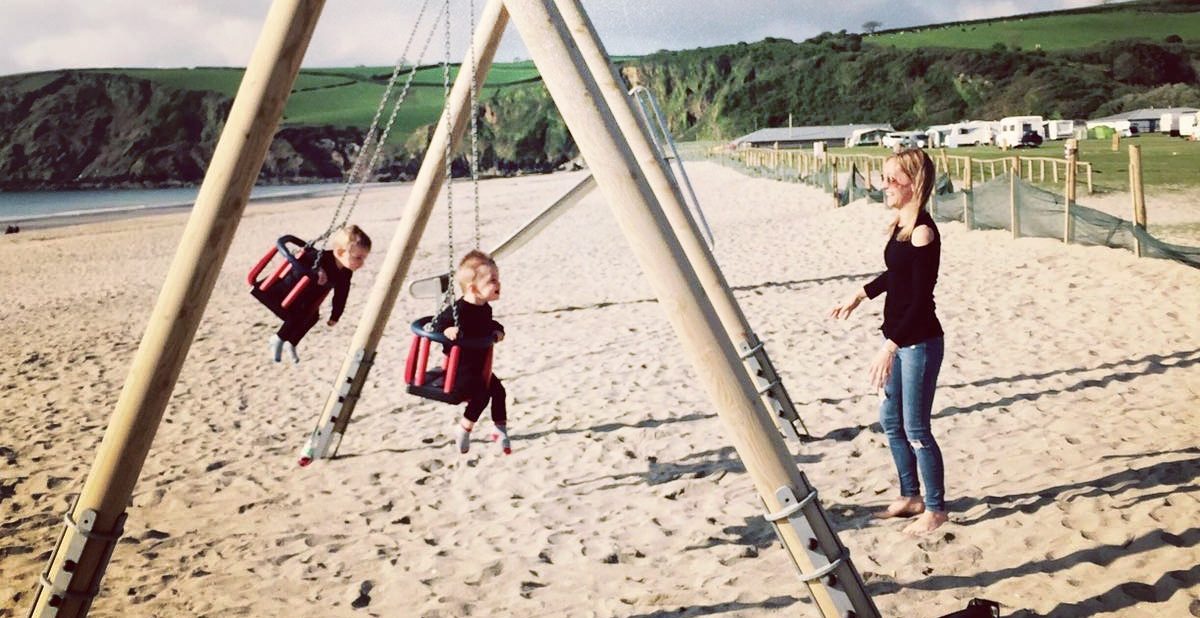 Today, we arrived home from a family holiday in Cornwall after spending 7 fantastic nights there.

I’m returning a dress size bigger, Ronnie with a nappy full of sand, Arnie with tonsillitis, and Keiths got a twat tan, he’s put his back out, pulled a muscle in his shoulder, looks like he needs a holiday…. (the list goes on).

I hadn’t mentioned I was going,  purely because I didn’t want to advertise that our house was stood empty. (Empty, but booby trapped like a scene from Home Alone).

The break has been perfect for us. We got upgraded due to our chosen accommodation being water damaged, we had abundant sunshine for the first few days and somehow dodged the rain that fell in the days after.

I ate chocolate biscuits before 6am most days, iced gems for breakfast, pizza for lunch,  and for dinner…. more pizza. In between, I ate a meringue bigger than my face, scoffed ice cream, had marshmallows on several cups of hot chocolate, and sucked down a beer (or tw…. three) as soon as the boys went to bed, every evening. Who knew one week could make such a difference! I feel fabulous! Poor old Keith on the other hand…..

Routine was pretty much scrapped on arrival and replaced with a ‘When in Rome’ approach.  Holiday mode was in full swing and the boys settled in well to their new surroundings (because we basically took the entire contents of our house).

Arnie still has a cough which landed me in the living room snuggled on the sofa every night. Well, every night bar one, after several desperately obvious hints to Keith to take the reins. When he finally got the idea he was to take the hits of Arnie’s fishy, dinner breath, coughing to the face, he set the living room up for us both to sleep there with Arnie when he woke at the strike of 12…. but as my body slipped through the cracks in the dismantled sofa Keith had set up on the floor, I finally marched my tired little ass into the double bed alone, where I grew increasingly pissed at the fact Keith had been enjoying such luxury and that he thought he’d get away with us both being on duty when it was his turn.

All of the above is of course said in jest. Being away meant the sea air gave us good vibes only. We just had the best time! Keith and I really were a team, and having that extra pair of hands every day gave me just the break we needed. The boys seem so refreshed and Keith was in his element, despite the fact the 100mph days have aged him 10 years and that Arnie has since been to out of hours and has tonsillitis. It would be out of character for him to return from holiday without something germy.

We did the usual holiday stuff like ball pits and sandcastles, ate out everyday, visited local attractions. We even headed to the beach in hurricane winds one late afternoon and like true Brits, barricaded ourselves into the smallest of spaces with wind breaks, just to get out.

Do you remember my girls from work who all had babies within 4 weeks of each other?  Well I don’t get to see them often now they’re back at work. Turns out if you drive 284 miles,  you get to see one of them!  By pure coincidence, Hayley was staying less than an hour away, so we all met for lunch and baby date on the beach. Not a relaxing lunch by any means. But just to be there together was super special.

Reluctantly, we took the boys swimming. The first time we took them, the pool was freezing and they hated it. They were only 5months and both ended up with croup which gave us no desire to repeat it. But I’m glad we did. They absolutely LOVED IT.

☆Favourite moment… being the only ones on the beach, in the wind, sheltered by windbreaks in a 5×5 space with the boys giggling and me and Keith toasting. That, and when we sat overlooking the harbour, both of the boys were asleep and we ate Cornish pasties and chips with mushy peas.

☆Quote of the holiday… “I know exactly which one that was… it was that one there that looks like Pat Butcher” (as Keith shouted looking through his binoculars at the passing ramblers who’d woke Arnie with their coughing fit).

☆ Best purchase… WD40 for the squeaky stroller wheel and of course a Cornish pasty.

I’m looking forward to getting back to the routine of daily life, although ironically that’s what we couldn’t wait to get away from. We just needed a breather from it. We needed time out, to breathe in the sea air and we just needed each other.  I for one have enjoyed the limited wifi and no signal. I’ve enjoyed the broken nights, lack of routine and the stupidly early mornings. I’ve enjoyed Keith.  I’ve enjoyed having time to eat and I’ve enjoyed the memories as we made them.

I even stayed at this very site 20+ years ago, and managed to find the same spot that I had a picture taken as a child!